Traveling from Marrakech over the Atlas Mountains to Merzouga or Zagora to have a desert experience you usually stop in Ouarzazate. A stopover to stretch your legs or have lunch. If you left early in Marrakech you will be in Ouarzazate by noon. As a photographer a bad time. The sun is right above you and there is hardly any shade and therefore no contrast.

What will immediately demand your attention is the Kasba Ait Ben Haddou. This place is known for its magnificent kasbahs, which are built against a hill. These are constructed of clay and together are called the Ksar. The kasbahs are fortified by walls with corner towers with narrow alleys in between, making them a typical example of southern Moroccan architecture. The city was declared a World Heritage Site by UNESCO in 1987. Ait Ben Haddou served many times as the film set of famous blockbusters and the famous series Game of Thrones.

The Nikon out of the bag.

Even though the light conditions are not great. The Nikon must be out of the bag. The river valley almost demands a panoramic shot. So I find a nice view point and take a series of photos. I find that I am impressed by what I see. I take the poor lighting conditions for granted. It’s what it is.

The disappointment comes at home.

After three weeks of traveling through Morocco, at home it’s time to start sorting and judging my work. I don’t know about other photographers but for me the moment of shooting is always charged with the fascination of ‘seeing’. When I feel that same fascination at home behind my Mac then I have made the picture that does right to the moment.

Good ‘shot’ but no prize.

When I reviewed my photos of Ait Ben Haddou at home it was clear to me. Good ‘shot’ but no prize. I was terribly disappointed. My photos were OK but I have not been satisfied with OK already for a long time. Like the hunter with his shotgun I had to acknowledge; not every shot is a rabbit.

I have to go back.

Yet it didn’t let me go. I had to go back. But not for a transit but as a end destination and to enforce the ideal conditions to make my shots again. There was nothing to do but buy another ticket and fly to Morocco. I must honestly confess, that’s really no punishment.

Three months later – Ait Ben Haddou – Morocco: This is how it was on my mind. This is how I wanted to make it.

And there I was. Three months later. I had already found a better camera point and something that looked suspiciously like water was flowing through an essentially dry riverbed. I absolutely wanted to have that water in the picture in this extremely dry setting.

My golden rule for The Golden Hour

I have a few golden rules. One of these rules, ‘Don’t try to organize, be on time and stay until you are completely satisfied.’ So I was on time. Sunset was expected around 7:30 and I was there at five. Camera tripod set up and the Nikon D5 on it. New pack of Marlboro in my pocket for the usual ‘Time killing smoking’. Slowly, bit by bit I see the light change. At that moment the light plan starts in my head. I take in some reference points. When the sun goes down there …. that is my moment. I do some spot measurements and light up another Marlboro. Just wait, this is going to be all right.

In the corner of my eye I see someone approaching. An old lady. She comes closer and closer and I see a beautiful authentic woman. I estimate her closer to ninety than to eighty. If there is a ‘god’ for photographers, then He must have sent me this old woman. She carries a basket and clearly has a destination. I hoped that she would walk ‘through’ my image but that turned out differently. Very politely she made a big bow around me. 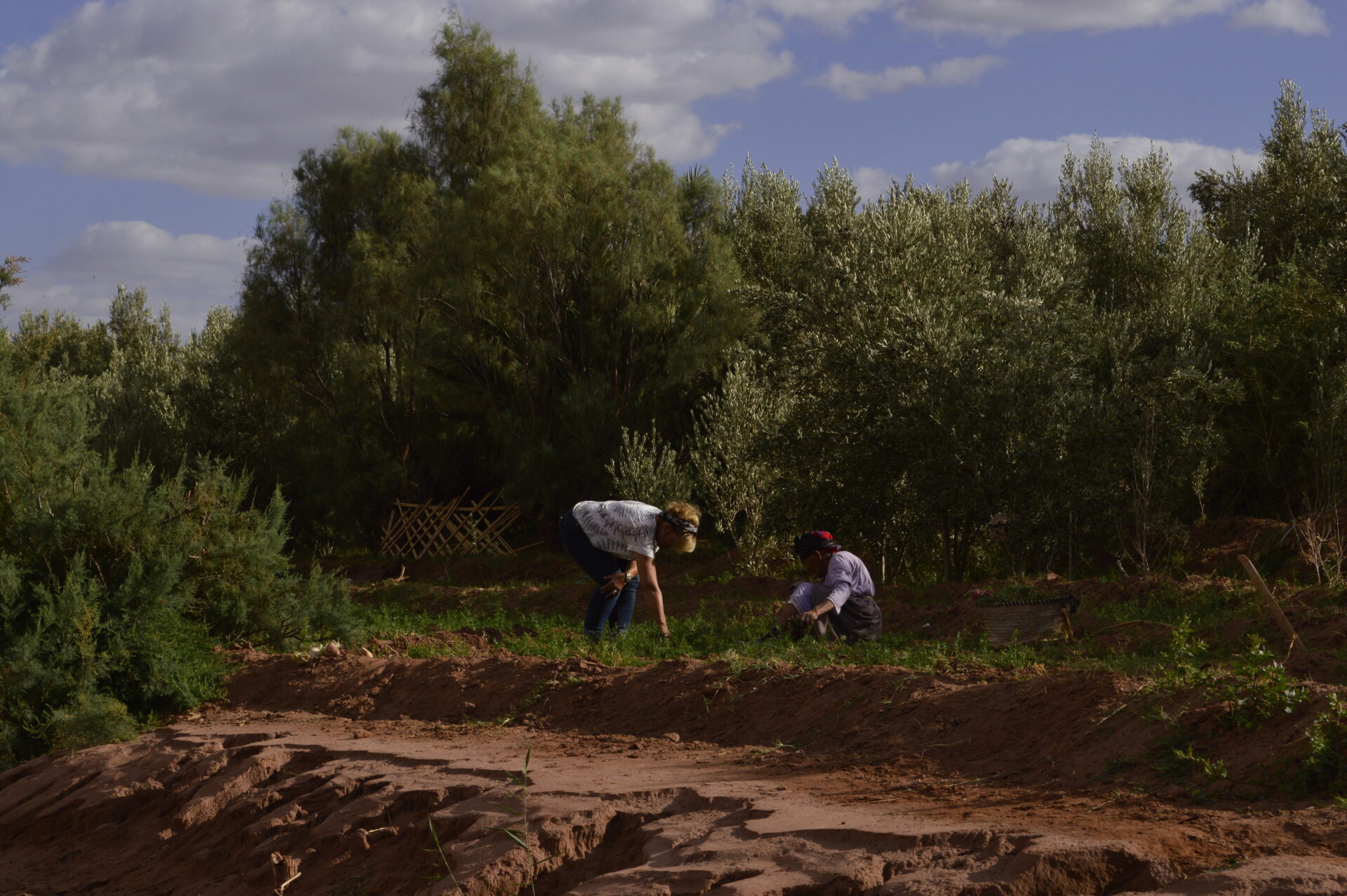 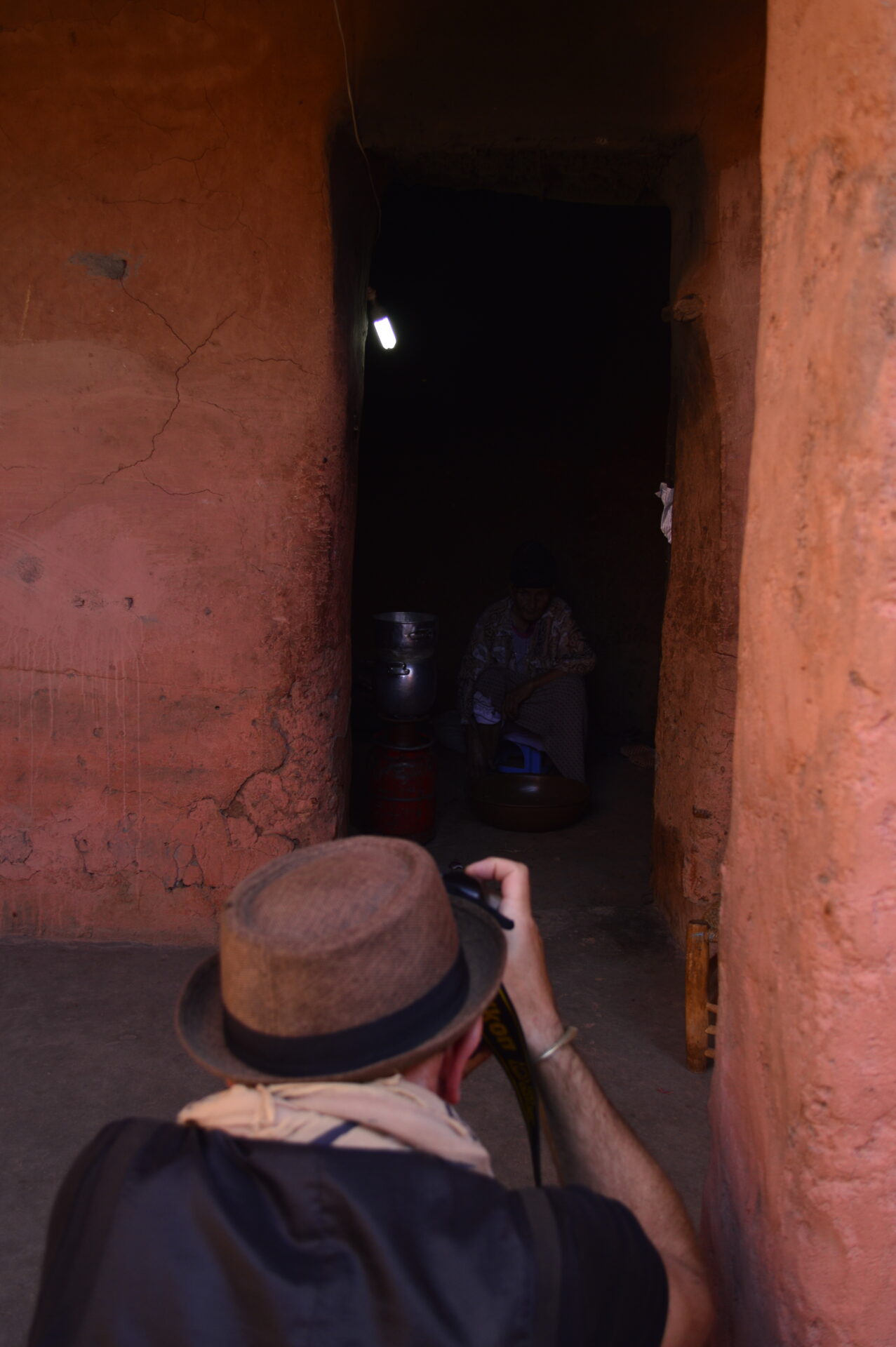 Whenever I travel, my wife Marion is my silent force. She does the pre production and on location she does what she can to bend the circumstances to our will. She gets things done as a woman that I certainly would not have gotten organized as a man. So also now. Marion decides to walk with her and have a chat. A chat that consists of communication with hands and feet. She speaks no Berber and the woman no French, German or English. The woman appears to be called Fatima and is looking for leafy greens for her donkey. Marion helps her look and weed the donkey’s food.

After a while she returns and she is invited to Moroccan tea at Fatima’s house. I keep waiting for the light. At least two hours pass. Marion comes back with good news. Tomorrow morning at 10 am we get to do a portrait series of Fatima when she is making Couscous the traditional way. Tomorrow morning we have an appointment. An appointment that would be as surprising as it was moving.

Everything falls into place

The next morning we walked at our leisure from the hotel to Fatima’s house. It is a small village so with about ten minutes we are at her door. Without being able to exchange a word we are all warmly welcomed. First we drink tea. Tea with delicious Moroccan cookies. With a pan and a plastic tub Fatima starts the Couscous. Her “kitchen” is a cooking place. A mud hut with an entrance where the morning light seems to swirl over everything like a silk. A light that Rembrandt would have been jealous of. There is only a gas bottle with a burner on it. This is where it’s going to happen.

I take the first shots. Fatima is a natural talent. She has no interest whatsoever in the camera and goes to work on her Couscous. The light is really exceptionally beautiful. Apart from the daylight, one light bulb is burning. The combination of daylight and tungstenlight makes the whole extra idyllic. When the Couscous is ready, her great-grandchildren arrive. They sit on Grandma’s lap and enjoy her Couscous. Filled with a warm feeling it seems like we have known each other for years. We say goodbye but not forever. Every time we are in Morocco we go to Fatima for tea. A special encounter that we carry with us like a little treasure.